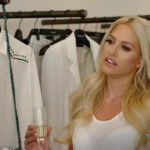 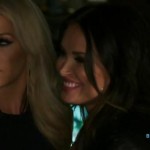 In this weeks episode of WAGS, Olivia called up Barbie to invite her to Natalie’s Instagram party, Barbie replied with an okay, just send me the details as Olivia said okay and hung up.

Barbie and Heidi were shopping looking for clothes, they got some champagne and later talked, Barbie asked how she was with having a baby and getting engaged as both of the girls squealed and Heidi looked at Barbie’s ring, Barbie later then told Heidi that Olivia is single and about what she said about hockey players and that there cheaters and about showing Natalie her ring and that she told her it was too small, she later then brought up that Natalie is having a 1 million instagram party and that Heidi is going with Barbie and that she’s not going by herself, the two girls made fun of the fact that they were having a party for Natalie, Heidi asked her why she had to go as Barbie told her that she’s all for what the girls do and support them and that she doesn’t want to really be there but she will support them for what they do, Heidi later then said she’ll go with her and be there for her and said they better not say anything about her ring or else she would say “Get her Barbie get her, and go” as the both of them laughed.

Barbie and Heidi showed up as Barbie introduced her to everybody, Heidi then asked Barbie which one said her ring was small as Barbie tried to tell her the one in black but both, Olivia and Natalie were wearing black, she then asked her which one said she hated Hockey Players, and Barbie said the one in black but there both in black. Barbie later said she doesn’t understand the whole Instagram famous thing, she worked in WWE for a living and that’s how she become famous, she also said the paddle faces, the cup cakes and the big blown up photos is just ridiculous, Olivia then pipped up to Nicole saying Barbie and Heidi were giving her dirty looks, Olivia then went over to her friend and told her about Barbie and Heidi giving her dirty looks, Olivia’s friend then said how would Heidi like it if she threw her drink in her face, as Olivia yelled “There’s going to be trouble”. Olivia’s friend then came over to Barbie and Heidi asking them if she’s giving Olivia dirty looks, Heidi looked at Barbie laughing asking if this was a joke there was a big fight between Barbie and Olivia’s friend, Natalie later came over asking what’s going on as Olivia pulled her aside saying Barbie and Heidi were giving her dirty looks, Barbie later then told Olivia’s friend that she doesn’t know the history between her and Olivia, she later got up in Barbie’s face as Nicole tried to hold her back she pushed Nicole to the ground as Nicole was complaining her foot was broken and in pain Barbie and Heidi smiled as Barbie said she couldn’t with that.

Olivia then called up Barbie to meet up with her to talk to her about everything and clear up any problems they had, Olivia got right into it saying that she can tell she’s pissing Barbie off with everything she’s saying, and that she doesn’t mean to sound offending, Barbie then told Olivia how she felt saying she invited them to the Ducks game and it felt like she threw it in her face, and then at the Instagram party she was starting stuff with her friend Heidi, Olivia then said she didn’t mean to offend or disrespect her and Sheldon and that she was sorry as Barbie accepted her apologie, Barbie told Olivia that she just hopes they can move past this as they both agreed that they can.

Who is Barbie Blank?

You can also get Merch on her Official Website.Click the photo to view or purchase her Merch

Have any media or fan photos from meet and greets with Barbie Blank, you would like to share with other Barbie Blank fans? Now you can. We’re always accepting media and candid photos of Barbie Blank. Credit always given to the rightful owners. Just email us with the photos and include your name with your facebook and or Twitter so we can give the rightful credit. 🙂 Email us at bbsourcecom@gmail.com