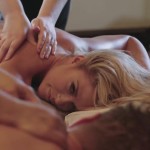 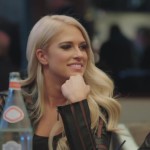 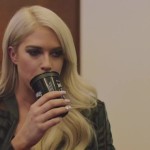 On this weeks WAGS, Ashley was trying to get her husband to set a date for there wedding, while the two were at dinner with the other girls she announced that they had set a wedding date, as they were sitting at Dinner, Barbie and Sheldon listened on as they all talked about football and how many years they’ve been in football, it was later than turned into another awkward feeling from Nicole and her husband as she was telling him that when he goes back on the road she’ll miss him.

Barbie and Sheldon were in there house as she asked him if he wanted her to cook dinner tonight, as she asked him what did he want and what did he feel like, he answered with something light, she asked him what he had a golf today as he told her all they had was breakfast they didn’t really eat, and that they just wanted to beat the traffic back, they were later interrupted by the door bell as Barbie stood up and said “Our Massages”, Barbie had made a couples massage appointment for her and Sheldon, she led them into there house and told them she would help them set up.

Barbie and Sheldon were laying on the massage tables as she told Sheldon she was trying to take his advice as to not get so hurt over it, but she was still very hurt about it. Sheldon then told her that it was kinda hard, but he wouldn’t let it get to her, and don’t over react to the situation, as Barbie told him that she knew and she just felt like Olivia was over stepping her boundaries, she later than went on talking about how she was the youngest female wrestler in WWE and she had a lot of people giving her a hard time and that Natalie and Olivia are bringing her back to when she was in WWE. Sheldon later told Barbie that she could take them to a ducks game and that he can set it up.

Barbie took the girls to the Anaheim Ducks game as she sat down and ate some food with the other girls, Ashley asked Barbie who is the fighter on the team and she said “there’s a few, you’ll know because everyone will stand up” Autumn later piped up saying that you’ll never know Olivia may get turned on by guys beating there each others asses. Olivia and Natalie were late to the hockey game as they later showed up acting like nothing happened, Barbie later said that it was such a big F U, as Barbie looked at Olivia she whispered in Autumn’s ear saying she’s not feeling the hockey vibe. Ashley later spoke up telling them to tell all of us, as Olivia then turned to Natalie and told her that she wanted to go do shots. They then saw the mascot Wild Wing, and later attacked him and started to mount him as Barbie felt embarrassed and disrespected by Natalie and Olivia and said that this was the last time that she was taking them anywhere. Barbie lashed at Olivia and Natalie telling them that it was disrespectful that they were on there phones the whole time and acting that they clearly didn’t wanna be there.

Real Name: Barbara Blank Coba
Ring Name: Kelly Kelly,
Debut:June 13, 2006
Born:Jacksonville,Florida
Birthday:January 15,1987
Mini Bio: Barbara Blank Coba (born January 15, 1987) is an American model, actress, reality television personality, and professional wrestler, better known by her ring name Kelly Kelly.Blank has a background in gymnastics and cheerleading, and worked as a model for Venus Swimwear and Hawaiian Tropic. In 2006, Blank was signed to a contract by WWE and, after training in Ohio Valley Wrestling, she debuted on the ECW brand in June 2006 as 'Kelly Kelly'. Primarily appearing in a non-wrestling role, she was a member of Extreme Exposé with Layla and Brooke Adams. Beginning in late 2007, she began participating in more wrestling matches, and unsuccessfully challenged for both the WWE Divas Championship and the WWE Women's Championship on multiple occasions. In June 2011, she won the WWE Divas Championship, commencing a four-month reign. She left WWE in 2012, but has since returned for occasional appearances. On the Raw Reunion special on July 22, 2019, she pinned Gerald Brisco to win the WWE 24/7 Championship, becoming the first woman to win the title. She is an overall two-time champion in WWE.
Blank has also appeared on a number of television shows, and was a main cast member of the reality television program WAGS.She tied the knot with Joseph Coba on April 9th,2021